I was in Erwin on Saturday morning for a pick up from the Post Office, as Diane had sent me another huge box of food. She seems to have become a little alarmed at my weight loss and is sending me more and more to bulk me up. Indeed, when I got the box, it completely filled my food bag and I had to turn my dry clothes stuff sack into a second food bag. I now hang two bags each night to give the bears additional choice. Very nice of me, I think you’ll agree.

While waiting for the Post Office to open, I asked where I could get some good old E&B and was directed to the Huddle House, in which I demolished three fried eggs, about ten rashers of bacon, a slab of hash browns, as well as two biscuits and gravy and about a gallon of coffee. Guilt-free gorging is a wonderful thing.

Given the late start, I only set myself a limited target for the day and was aiming for Curley Maple Shelter, about four or five miles out of Erwin. However, it was pretty much uphill all the way, so I was comfortable with the choice. In the meantime, I needed to get a lift and decided to call the famous Miss Janet.

There are a couple of famous names related to the Trail, and Miss Janet is one of them. The other famous name is Earl Schaffer, who was the original walker of the entire Trail in 1948, repeating the effort in 1988. When I stayed back in Hot Springs, at Elmer’s, I was given the room that Mr Schaffer stayed in on both occasions, so I already had a link to this Trail luminary. I now have a link to the other luminary.

Miss Janet fell in love with the Trail, and hikers, as a teenager and spends pretty much all of her free time providing free lifts, Trail Magic and anything most hikers need. I was given her number and asked respectfully if she’d be able to run me back to the Trailhead at about noon. When I thanked her, she thanked me back! Right on time, her battered old van turned up with several hikers with various destinations in mind. There was the obligatory stop at Dollar General, the hikers’ favorite store, as well as McDonalds, which was necessary for several guys as they tried to stuff even more calories down their throats. Nothing was too much trouble for Miss Janet and we went via her daughter’s home to pick up a few more vagabonds who had camped on her porch. The Trail does this to some people; reasons for their generosity aren’t really necessary.

The hike was tricky and particularly uphill at the end, when I was puffing and panting and happy to get there after about two or three hours, meeting several old friends who had made it out of Hot Springs eventually and caught up. Indeed, the shelter was full and the whole site looked like a tented village. There were a bunch of section hikers from Augusta, all great guys, and I knew we’d have a terrific evening as there was a great vibe in the shelter. However, I was unprepared for the event of the evening.

Several of the youngsters, part of the self-styled group, “no parents, no bedtime,” found a challenge written in the shelter. The picture below shows the challenge, though the gist of it was that teams of two had to run BACK DOWN the mountain, hitch into Erwin, order two large pizzas face to face in the pizza shop, buy 24 cans of beer, then run back up the mountain in record time. Bloody crazy, if you ask me, but, incredibly, we soon had another team, from the “7am Crew.” The “vintage” hikers, including me, looked on as these crazy kids, on the stroke of 5pm, hurtled back down the trail. 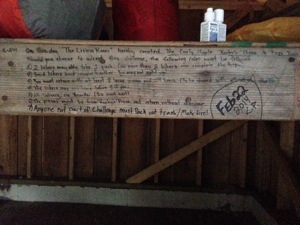 So there we were, ready to eat but not quite sure whether or not there would be pizza in a few hours. Hiker hunger took over, however, so the pots and pans were soon turning out noodles and soups. Amazingly, less than three hours after they left, all four returned with 4 pizzas and 48 cans of beer! It was stupendous and the signal for a party to begin. The teams are below; they are (left to right), Buchanan, True Story, Hawkeye and Science Tooth. 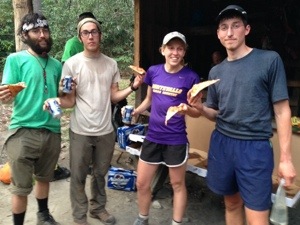 I was now planning to meet Diane at Carvers Gap, so had to make sure that I restricted my miles to meet that goal. Accordingly, the next day, I needed to go less than 13 miles, to Cherry Gap Shelter and found myself at lunch on the gorgeous, though somewhat unimaginatively named, Beauty Spot. I tried to turn the view round during the video, so please forgive the dreadful editing!

After the splendor of Beauty Spot, I had to struggle up Unaka Mountain, which was quite a treat at the top, with a really beautiful forest of spruce. Note the ubiquitous white blaze in the right foreground; these blazes were particularly necessary in this forest to avoid getting completely lost. 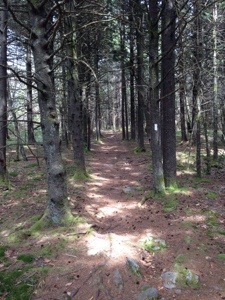 We were expecting rain, so I secured a spot in the shelter, amongst the mice and filth, not wishing to pack a wet tent in the morning. No rain came overnight, though there was a lousy forecast for most of the rest of the week. For this reason, I pushed on to Clyde Smith Shelter, only 9 miles away and a pretty easy hike, and I found myself there at about 1.30pm. Most people hiked on, while I settled down on my chair and read my book in the glorious sunshine. The weather started developing quickly, which means that the clouds rushed in, followed by huge rainfall and thunder and lightning. As a consequence, the shelter rapidly filled up and we soon discovered that location is all, as Blue, one of my fragrant tobacco friends, discovered a leak in the roof right above his head. After some rapid temporary repairs, he settled into some semblance of comfort, typically undeterred by this unfortunate turn of events.

The rain subsided and a Kiwi, named Jandle, set about building the biggest and best bonfire I’ve seen. It was terrific and we were all warmed and buoyed by the fire. 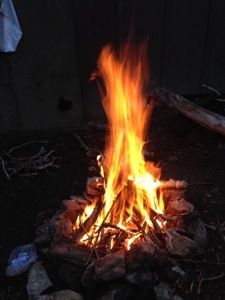 Unfortunately, the rain, thunder and lightning returned dramatically and we spent the night battered by the storm. The morning provided what we thought was a temporary break in the weather, and I only had 9 miles to go to meet Diane, but was concerned about my ability to cross Roan High Knob with the impending storm. However, I decided to chance it and the rain happily stayed away for my hike, though it threatened throughout. Sadly, and something of a sign for what was to come later, the clouds descended and I hiked over the last 6,000 ft peak before Mt Washington later this summer in New Hampshire.

This got me to Roan High Knob Shelter for a quick lunch before going the last mile or so to meet Diane at Carver Gap.

Then things got difficult and AT&T let us both down.

I had the dreaded “no service” but hoped to be able to get a signal once on the road. Diane was landing at 12.30, so I hoped we’d meet up around 2.30 or 3pm. However, when I emerged onto Carvers Gap, the visibility was down to about thirty yards and I could hardly see anything, least of all my lovely wife. Nor could I contact her. Once again, I was struck how lost I have become without this lifeline.

Soon after I arrived, a bunch of ladies jumped out of their two cars to hike and offered their Verizon phone for me to try to contact Diane, but I was unable to get through to her and said I’d simply have to stick around until she turned up. Immediately, the goodwill that permeates this Trail came to the fore once more and one of the ladies said she would leave her car unlocked and I could wait inside. I gratefully accepted and sat there, out of the cold until a car drew up.

Hoping it was Diane, I got out quickly, but it turned out to be an elderly couple, who quickly offered to take me down the mountain to try to get a signal or to make a call from the Park office. Ten miles later, still unable to hear from Diane, I had to return to the top, in the cloud, and was run there, kindly, by the same couple. Diane must have turned up there when I left but, after being spooked by the cloud, the mountains, the roads, the lack of any human activity and the fact that I was nowhere to be seen, she made the sensible decision to get to our hotel in the hope I would contact her. Having AT&T, she also had no service at the top.

Eventually, after another hour at the top, a young student and her boyfriend, who had been tracking red squirrels (I mentioned my 50 miles a squirrel record to her great amusement), offered to run me down to Roan Mountain, a nearby town. Ultimately, I got a line and spoke with Diane. She was just too upset to be able to come and get me and I didn’t want to put her through anything else, so I got a lift from a local hostel and got to Boone, NC, at about 8pm.

This was a traumatic end to a great day’s hiking, yet you can see from the picture below that we are relaxing today, doing pretty much nothing. Believe me, seeing Diane has revitalized me more than I could have thought and, once she drops me back at Carvers Gap on Friday, I’ll be pushing on more determined than ever to justify her faith in me and my great adventure.

I’m a really lucky guy and I surely know it.

4 thoughts on “The Rocky’s Pizza Challenge”