My break in Daleville really put me back into the right frame of mind and I was ready for a bigger day on Sunday. I was heading for the Blue Ridge Mountains, where we come quite close to the road most of the time and cross it every now and then. I was heading up one of the tracks when I came across a mother and baby deer just ahead of me on the Trail. They would normally bolt straight into the bushes, but they simply headed further on up the Trail, looking back as they went. Because I hadn’t expected them to behave in this way, I didn’t pull the camera out and they played peek-a-boo with me for about 5 minutes before diving into the undergrowth. It was delightful.

Soon after, another black snake decided to show me who was in charge by setting up camp in the middle of my path for a couple of minutes before slithering on. I think he wanted his picture taken so I obliged him. 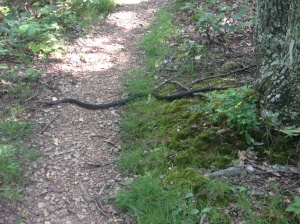 I got to Bobblets Gap Shelter to complete an 18.5 mile day and felt good about being back on track. There was an interesting crowd in the shelter, all of whom had some relationship with chemistry, making me the dumbass of the group. A couple heading south on a section hike were chemical engineers, while Rip Van Winkel was a chemistry teacher. Even Yak, who turned up later, majored in chemistry at college. Funnily enough, we had a good chat and stayed well away from chemistry. I tented, as usual and had the fun of dealing with a rainy night, though kept dry myself.

The following morning, the rain had gone and I hoped to put in another long day. The sun was forcing its way through the trees and I took a lovely shot that looks a bit like the beam that teleports Spock and Kirk in Star Trek. 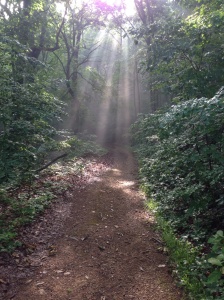 I made pretty good progress for the rest of the morning, intending to visit yet another water hole at Jennings Creek and stay for lunch. I had a great swim, though it was darn cold again. This time I didn’t film it, as there are only so many ways to show a big bloke flouncing around in water and I think we’ve been there, done that. I dried off and had lunch, then totally lost my momentum. The rest of the afternoon took me on a few more miles to the wonderfully built Bryant’s Ridge Shelter. On the way, I saw another deer, though this one stuck with the normal script and bolted out of my sight in a flash.

I also had the benefit of a lovely bit of Trail Magic. I was struggling uphill in my normal fashion when I saw a woman and her four young children hiking down. While the young mother dealt with a recalcitrant child who was trying to rearrange the rocks on the Trail, a gorgeous 8 or 9 year old girl asked if I wanted an apple, while her brother rummaged in his bag for this fruit. Very nice and always appreciated.

I got to the shelter by 3.30 and simply stayed, while Yak and Naturally Hob came through only to move on. Eventually Rip Van Winkel staggered in, followed later by Smoke and Smacky, a couple of quiet Austrians. With so few people there and rain threatening, both RVW and I set up our tents under cover of the shelter, so at least I got a flat spot for the night!

Another couple from California stopped in for about 30 minutes and I gave them some of my own Trail Magic, as they were out of gas for their stove and I had a spare for emergencies, so I handed over the one I was using and started on my reserve. I hope that generosity doesn’t come back to bit me in the ass.

In the morning, I decided to experiment by adding my coffee to my normal oatmeal and protein mix. This is not to be recommended and turned the normal gelatinous goo into a nasty brown sludge. Of course, I still gulped it all down.

My new filter system is really working out and I now get much more to drink, which is getting increasingly necessary as the days become more muggy. That said, I was able to hike my first 20 mile day, reaching Matts Creek Shelter after 22.6 miles. To celebrate, I had a dip in Matts Creek, only to get out refreshed and have a snake pointed out to me on the log I’d been sitting on five minutes before.

That night, I was outside in my tent again when, at about 1.15am, I heard a faint thunder clap that was a precursor for increasingly closer thunder and lightning until it was right above me. The flashes of lightning were the most ferocious I’d ever seen and the accompanying rain, when it came, precluded me from racing to the shelter. As a consequence, I simply had to wait it out and spent the following 45 minutes checking with my night light to see if the tent had been breached in any way. Fortunately, apart from a few splashes, everything stayed fairly dry. This video gives a more relaxed description the following morning.

Yesterday, Wednesday, I hurried the couple of miles to the road, over a long, beautiful wooden footbridge, then hitched a lift into Glasgow, where I had a mail drop from Diane waiting for me. This came just in time, as my new regime of eating like a demented man had pretty much exhausted my supplies. With a full pack, I decided to treat myself to a burger and fries at 10.30 in the morning and wash my disgusting laundry once more. Consequently, I didn’t leave Glasgow and return to the Trail until about 1.30.

I was headed for Punchbowl Shelter, about a further 11 miles away and I knew that there were going to be some early uphills. However, prior to the pain and anguish that these hills inflict upon you, there was a lovely opportunity to film myself hiking along an idyllic spot by the river that was mercifully flat and fairly tree root free.

This gorgeous walk turned out to be the last comfortable part of the day, as I worked my way up the mountain, only to start hearing thunder in the distance once more. When I got to the top, I identified a spot where I waited for a while in case I needed to pitch my tent and get out of harm’s way (quite how I’m getting out of harm’s way is something of a mystery, as there is the ever present opportunity of getting clunked on the head by falling trees!!). You can see from the film that the storm was well away from me, so I decided to move on.

This decision proved to be faulty, to say the least, as I was suddenly set upon by high winds and increasing thunder. There was nowhere to pitch the tent, given the dense undergrowth all around, so I did the only thing I could think of, which was to put it up right on the Trail. This must be an egregious breach of hiker etiquette, but I’m afraid I just wanted to be inside. Happily nobody came along and, very soon, the sun was out again and I felt something of an idiot. Packing the tent once more, I headed on, only to have exactly the same thing happen again. Again, I set up the tent where I was and, again, the sun came out. Each time, the storm skirted where I was and wreaked havoc further up the trail.

I reached the lovely Punchbowl Shelter and set up tent for the third time that day, pausing to film how gorgeous it all was.

Yet again, the rain wouldn’t leave us alone and this morning, I was getting a bit miffed about the air of dampness that was on me. I started out with an ambitious target but my heart wasn’t really in it, despite passing the 800 mile marker after about eight or nine miles.

I was hiking near Billy Goat, whom I’d met the previous evening at Punchbowl, and he told me about a cheap hostel in Buena Vista (pronounced Boona Vista). He needed to say nothing more and I joined him and have now showered, done laundry and shoveled down a pizza and two beers.

I guess that the antibiotics may still be in my system, yet I’ve done over 100 miles since my return a week ago. I’ve had two tough days but the rest have been great. I know I have to listen to what my body tells me and tonight it told me pizza and rest. I’m happy I paid attention!