The Lake of the Clouds Hut has a reputation of being one of the friendliest huts in New Hampshire and, despite a few reservations, we were treated well. We were able to stay in the hut overnight by doing “work for stay.” This variant of “work for scraps” involved more work, including endless washing up (by me, in a sink designed for a midget) and fridge cleaning (apparently long overdue) though we were fed very well and allowed to sleep in the dining room, in most cases on the floor. I was able to snag a bench and settled down for what proved to be a disturbed night.

My reservations are more about the disregard us “hiker trash” have to put up with, though I may be being a little hyper-sensitive. That said, we rarely see a raising of the flag when we arrive bedraggled and wet!!

We were dreading first light, as we knew the tenor of the day would be set by the weather conditions. The climb up Mt Washington was immediately in front of us and we set out when we saw breaks in the clouds and the sun trying to force its way through. This turned out to be a great decision.

I’ve been hiking so much better in the Whites and I set off like a train, pushing on as the scenes revealed themselves in front of us. This video captures my excitement once more.

We were expecting the weather to close in on us, as

there had been snow the day before at the summit though, once there, after a quick team snap, we found the snack bar and topped up our sugar and calorie levels once we’d savored the experience at the top. Given the weather forecast and the unpredictability of Mt Washington, we moved on, heading for the next hut and, ultimately, the Osgood Tentsite.

Trillium and Lighterknot were a little slower than me and Tee Bird and we all enjoyed the remarkably mild day and occasional break in the cloud that showed spectacular views. This is one from Mt Adams, followed by a daunting one of Mt Madison, our after lunch target.

This was the next target, with its pinpoint summit.

At the next hut, we lunched inside and braced ourselves for the steep climb up Mt Madison and the following, far longer, descent. Another exhilarating climb saw me at the top before the others and, as I was at the very small summit, I launched into a gorgeous, though precarious 360.

The descent was probably the toughest we’ve done so far, climbing down nearly 3,500 ft over 2.5 miles. It was a bloody awful time and really messed up everybody’s knees. We gratefully found the Osgood Tentsite and Lighterknot and I set up on one tenting platform, while Trillium and Tee Bird set up on another one. These platforms are made of wooden slats that give a nice level ground and obviate the need to find an otherwise flat spot. Trillium had somewhat lost her humor at this point, so we had a quiet evening and crashed early

We’ve settled into a kind of routine, breakfasting, packing up and leaving by 7.30am. Given the time it takes to do a mile in the Whites, particularly in the Presidential Range, we need to hike for about 10 or 11 hours to do pretty much the same number of miles.

Our first target the following morning was Pinkham Notch, where we had arranged to meet Shepherd once more and refill our food bags. The terrain didn’t seem too bad, though I struggled quite a bit and was happy to get there, even though it was less than 5 miles. That said we got there in less than 3 hours and immediately hit the snack bar for a very substantial sandwich and various sweet goodies before consolidating our food bags.

You may recall in a previous post that I had talked Stardust “off the ledge” when she was contemplating quitting and I was delighted to see her again, at Pinkham Notch, happy and hiking with a bunch of friends. It made me feel all paternal!

I had been trying to make do with a single trekking pole after the previous day’s accident, but it really makes a difference when you are used to both, so I splashed out $100 to buy a decent, though not best, set of Leki poles. The effect was immediate and I really got stuck into the hike up from Pinkham Notch. It was a substantial climb up to, eventually, Wildcat Mountain, followed by a steep downhill mile to Carter Notch Hut. We offered to “work for stay” but, with only one guest, they didn’t need us to work but allowed us to sleep on the floor. There were eventually 7 of us crammed into the dining room, while I put 2 benches together and used them for my bed. That’s living!!

After a fairly sleepless night on my bench, the following day turned out to be a great mileage day, yet one that was, once more, very painful on all our legs. We had to be packed up by 6.30am and out of the hut by 7, so it was an early start to the day.

The climb up Carter Dome was the most intense of the day, with about 1500 ft elevation gain in just over a mile. However, we all seemed to be ok with this, despite some tough hand over hand stuff. We were rewarded with absolutely no view once we got to the top, as we found ourselves in the middle of a cloud.

For the next couple of hours we were going along the ridge, sometimes up, sometimes down, before we came to North Carter Mtn and the truly ferocious descent on the north side. This was basically sheets of rock, wet from the overnight rain and ready to catch the least aware of us.

I led the way, trying to find the least dangerous route down by a combination of rock hand and footholds, tree trunks, branches and even exposed roots, along with a heavy slice of luck. There were several times that I slipped, but was always able to recover sufficiently to steady myself and help the others. I found it exhilarating, though it was playing havoc with both my knees.

We eventually made it to the Imp Shelter, at which time we had lunch and ran into a couple of hikers I hadn’t seen for several weeks, Nobo Hobo and Caddyshack. Over lunch, we decided to push on to the Rattle River Shelter, which meant a climb up and over Mt Moriah followed by another long downhill.

Trillium and Lighterknot were struggling by the time we eventually got to the shelter and we decided we’d camp and treat the following day as a “nero,” with just a few miles into town and staying at a hostel.

For me, this was a significant decision, as I pretty much put my September 25th finish beyond me. I’ve reasoned that hiking a little slower with a team is far safer than hiking a little faster by myself. This is disappointing, though probably sensible and I’ve squared the decision with both me and Diane. I want this to be a life-affirming trip as opposed to a life-threatening one.

Another safe night and we were happily marching on the way out of the White Mountains with hardly a scratch. We have had incredible luck with the weather, only being rained upon when we were safely tucked up in huts. I couldn’t imagine how difficult these mountains would be if there was consistent rain and the rocks were always slick. As it was, despite a little bit of slickness on a couple of rocks, and roots, I’ve had a blast.

I’ve been thinking about changes I’ve made to my diet, as I’ve gone from 4 high protein bars a day to 4 Snickers or Cliff bars, with a high protein bar at the end of the day once I’ve stopped hiking. Trillium suggested this as a better way forward following a conversation she had with a nutritionist and I certainly feel far more full of energy. That said, I started taking multi-vitamins at about the same time, so it may be that. However, as they say, “if it ain’t broke, don’t fix it,” so I’ll carry on as I’ve been doing and hope to get to the end as well as I feel now.

We are currently neroing at the White Mountains Lodge and Hostel, near Gorham, an absolute bargain at just over $30, with laundry, working wifi and your own proper bed, as opposed to an exercise in scumminess at some other places I’ve been in. 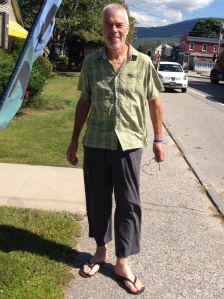 To keep the place clean, the rules are that no packs nor boots are allowed indoors and hikers get out of their filthy clothes and wear clean hostel clothes. As you can see, it’s quite a look.

Marnie and Marnie’s mum (Molly) really make you feel at home and give two shuttles a day to stock up and fill your face, both of which we’ve been doing. It is only when you shower and generally clean up that you realize you are still part of the civilized world, a good indicator for anybody, I feel.

We are nearly out of New Hampshire and now have less than 300 miles to go, though we are aware of the challenges that Maine poses. That said, I am hiking better than at any time on the trip and NH has far exceeded my expectations.

I hate to make predictions but, injury aside, I’m going to complete this and, to be honest, I’m going to be proud of the effort when I’m standing there, grinning like an idiot at the top of Katahdin. This trip has tested me more than I can ever relate to you and I’m sure further lessons will be revealed once I can put the whole thing into perspective with the distance of time. I would urge anybody to do it as long as they understand that this is a full six month commitment to something they want to do more than anything else. Once you make that commitment, you’re almost there (apart from the 2200 miles, which still need to be hiked)!!!

7 thoughts on “All The President’s Men (and women)”